The Fox and The Cat 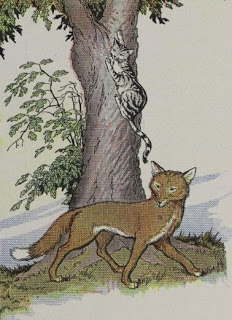 One day a cat and a fox were having a
conversation. The fox, who was a conceited creature, boasted how clever she
was. 'Why, I know at least a hundred tricks to get away from our mutual
enemies, the dogs,' she said.

'I know only one trick to get away from
dogs,' said the cat. 'You should teach me some of yours!'

'Well, maybe some day, when I have the
time, I may teach you a few of the simpler ones,' replied the fox airily.

Just then they heard
the barking of a
pack of dogs in the distance. The barking grew louder and louder - the dogs
were coming in their direction! At once the cat ran to the nearest tree and
climbed into its branches, well out of reach of any dog. 'This is the trick I
told you about, the only one I know,' she called down to the fox. 'Which one of
your hundred tricks are you going to use?'

The fox sat silently under the tree,
wondering which trick she should use. Before she could make up her mind, the
dogs arrived. They fell upon the fox and tore her to pieces.

A
single plan that works is better than a hundred doubtful plans.